What is Hepatitis C

What is Hepatitis C?

The word 'hepatitis' literally means inflammation of the liver. Hepatitis C, which is also called HCV or hepatitis C virus, is a viral disease in the blood that affects liver cells. The virus is one of the most common causes of liver inflammation in the world and can ultimately lead to (serious) liver damage, failure and cancer. At the present time, vaccination against hepatitis C is not possible, but the virus can be treated with other medication.

From liver inflammation to liver disease

After a number of years, hepatitis C can lead to liver damage and result in liver disorders, such as fibrosis (the first phase of scarring of the liver) and liver cirrhosis (the infection of increasingly more healthy liver cells due to the spread of scar tissue). What precisely happens if you have hepatitis C virus is described below.

Acute hepatitis C
The period in which a person first becomes infected with HCV is called the 'acute phase' or 'acute hepatitis C'. In some cases, the body can rid itself of the virus without treatment being required. This happens in approximately 15 to 25 per cent of cases.

Chronic hepatitis C
If the hepatitis C virus has not gone after six months, the disease has progressed to the 'chronic phase'. This occurs in approximately 75 to 85 per cent of cases. After a number of years, this can result in liver damage and lead to mild, moderate or severe fibrosis. Fibrosis is scarring of the liver. If it worsens, the functioning of the liver can be impaired. In the Netherlands,
about 27,200 people have chronic hepatitis C. 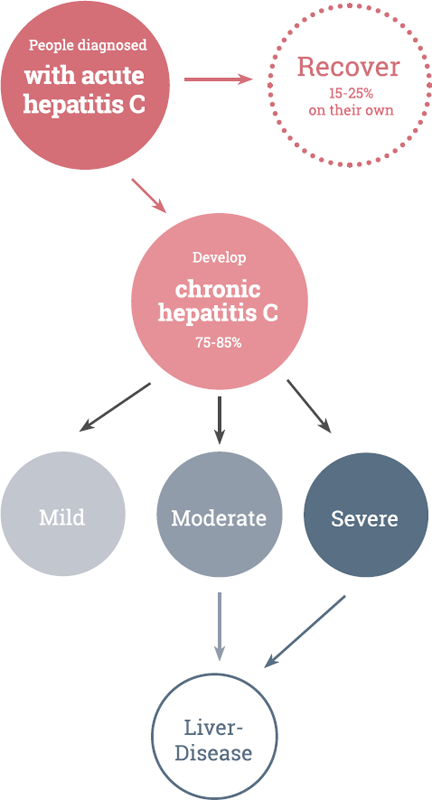 Liver disease
HCV can lead to liver diseases such as fibrosis. Fibrosis is scarring of the liver. The replacement of increasingly more healthy liver liver cells by fibrosis (scar tissue) ultimately results in liver cirrhosis. Cirrhosis is severe liver damage: impairment of the liver through the forming of scar tissue. One of the symptoms of hepatitis C that can indicate cirrhosis is jaundice. It takes on average 20 to 30 years for cirrhosis to occur. It happens in approximately 10 to 20 per cent of cases. Some patients may eventually need a liver transplant.

In 1 to 4 per cent of cases of liver cirrhosis, the patients develop HCC (Hepatocellular carcinoma). This is the most common form of liver cancer in the Netherlands.

Approximately 160 million people (3 per cent of the world's total population) are infected with hepatitis C and most sufferers do not even realise that they have the disease. These are about 160 million people. Every year, about 350,000 people around the world die as a result of chronic hepatitis C. In the Netherlands, about 27,200 people (about 0.16 per cent of the population) are affected. The virus is more prevalent in the Mediterranean Region, Eastern Europe, Africa and Asia.

What happens to the liver?

Are you sure that you want to leave this site?

You are leaving the Hepatitis C guide website to visit a site that is not under the control of AbbVie. AbbVie is not responsible for the content or further links of such a site. AbbVie offers you this link simply for your convenience. The provision of a link does not mean that AbbVie agrees with the site to which it refers. You should also be aware that this link might have its own standard conditions and its own arrangements regarding data protection. AbbVie bears no responsibility for this. Conversely, the presence of this link does not mean that AbbVie's Hepatitis C guide is approved by the site referred to.

Are you sure that you want to leave this site?